An Astonishing New Book about Vietnam

By John Dorschner
My best friend in college, Bill Ingalls, has just published an astonishing book about his year in Vietnam. It is insightful, harrowing, occasionally funny and utterly frank – an account of a onetime Soldier of the Month getting by with pot, booze, a defiant attitude – and a bit of luck.
He operated a road grader – sitting six feet above the ground, a perfect target for any sniper – especially during a nerve-jangling stretch near the Cambodian border when he helped construct a Special Forces camp. In between, his Army life often consisted of  “backbiting, threats, bribery and blackmail” – while wheeling-dealing, trading Philippine army guys diesel fuel in return for pot. 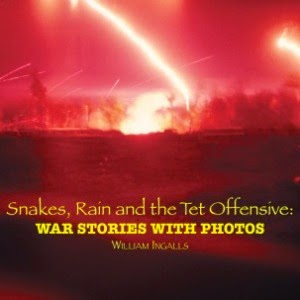 
I was fascinated by his accounts of the absurdity of the war, but the book could attract a completely different readership with the photos and accounts of all the heavy construction equipment. Though they sometimes broke down under brutal conditions, the machines were pretty damn tough. (An enemy shell once knocked an inch-and-a-half hole through an engine block and the damn thing kept going.)
He hasn't lost any of his old individualism. In this age of Youtube and videos everywhere, he's built a full-fledged sound studio in his garage, producing (among other things) movie-length radio dramas and much shorter book reviews that he's marketing to radio stations.
Posted by John Dorschner at 6:14 AM