Can Miami start to solve its affordable housing crisis by hitting wealthy non-residents with fees? Click HERE for full story.


Posted by John Dorschner at 3:52 AM No comments:

By John Dorschner
Three and a half years after the county commission told the mayor to prepare a report, Carlos Gimenez has finally produced a study on the feasibility of starting a county ID program -- a major help for several vulnerable groups that don't have other kinds of government-issued IDs.
Many cities around the country already have such programs -- including San Francisco, New York, Detroit and Chicago.
PACT Miami -- People Acting for Community Together -- has been pushing hard for the program for several years as a way to solve a crucial immigration issue. PACT represents 40 churches, synagogues and mosques that have banded together to deal with major local issues under the slogan "let justice roll." This reporter is an active member of PACT.

The 16-page mayoral report cites advantages and disadvantages of the program. In a letter to county commissioners, Mayor Gimenez writes: "A local card program could ... alleviate barriers for several vulnerable and disadvantaged populations, including immigrants, homeless, seniors and formerly incarcerated individuals."
The report estimates that 55,000 Dade residents are "unauthorized and undocumented" and without an ID they have many barriers to routine activities that "range from retrieving a package from the post office to accessing health services."


The heavily footnoted report states there are about "450,000 undocumented immigrants in the Miami-Fort Lauderdale and West Palm Beach area who contribute more than $437.4 million in taxes. Because many immigrants work in a cash economy and are unable to open bank accounts without government issued identification, they become vulnerable to theft," and they often are afraid to report crimes.
The report cited negatives and pitfalls, including undocumented persons being put on a registry that could be used by law enforcement. The report estimates that an initial start-up costs for the program county-wide would be $2.5 million, plus $220,000 per year vendor costs.
This feasibility study has been repeatedly delayed. It was originally supposed to be done in 2016. Later, it was promised for Sept. 14, 2018. That was delayed again to Jan. 10, 2019. That deadline too passed.
On Monday, April 1, PACT held its annual Nehemiah Action Assembly, in which about 1500 members of religious and university groups gathered together to ask local elected officials to commit to issues regarding immigration, affordable housing and gun violence.
On immigration, PACT, tired of waiting for the feasibility study, set a more direct goal: "Secure a commitment from county officials to make municipal ID program a reality. We want the municipal ID program to come to fruition by 2020."
Only two county commissioners attended the event. Daniella Levine Cava and Eileen Higgins both committed to the PACT goals for affordable housing, but they both hesitated on the ID program because they hadn't seen the feasibility study. 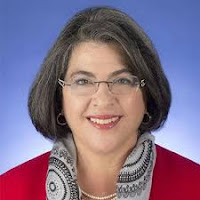 The next day, Tuesday, April 2, the mayor released the long-delayed report.
PACT had repeatedly asked Gimenez to attend the event. He refused. County commissioner Xavier Suarez had committed to attending, but didn't show up. 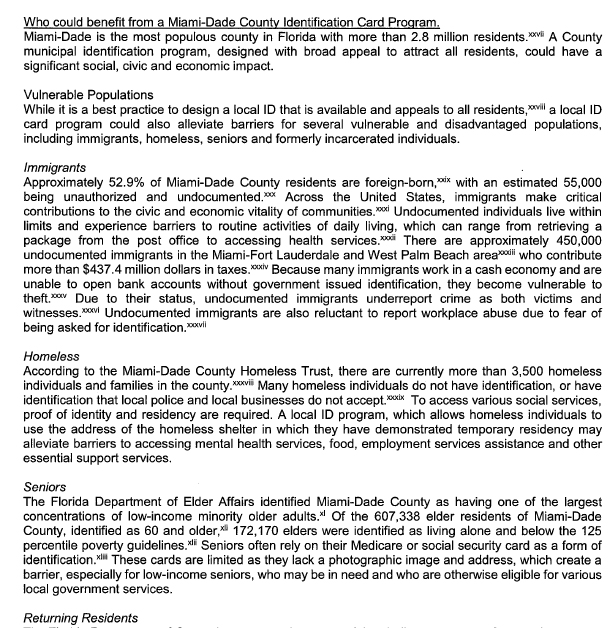 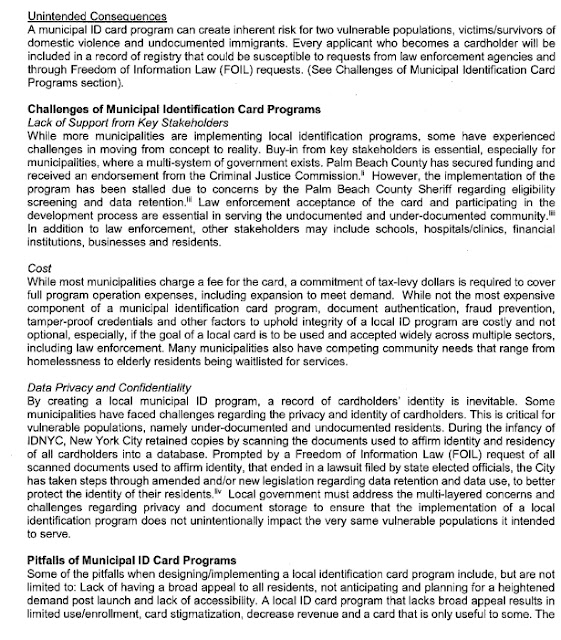 Posted by John Dorschner at 2:17 PM No comments:

Recyling: "When in Doubt Throw It Out"

Here's a new motto for your recycling: "When in doubt, throw it out."
Meaning don't put it in the recycling bin.
That's the message from Dawn McCormick, spokeswoman for Waste Management's massive  Reuter Recycling Center in far western Broward, which handles all of Miami-Dade County's recycling and two-thirds of Browards.
Behind this simple message is a complicated tale, involving big bad China, worthless glass, suspicions of Vietnam landfills and a rebellion by the mayors of Sunrise and Deerfield Beach.For full story, click HERE.
Posted by John Dorschner at 4:38 AM No comments:

Here's a modest proposal for us fans of the Tour de France who are bummed out by the dark questions surrounding Chris Froome, winner of four Tours who uses a drug that opens air passages to his lungs:
Let's give a special award to the top rider who does not use any drugs, including those allowed presently by authorities under the category "therapeutic use exemption."
That will give us fans something to cheer for, even if someone like the drug-using Froome once again manages to finish first.
Perhaps the leader in that competition could wear a jersey. How about one with red, white and blue stripes? The tri-color of France.
Here's the background:
(1) Froome has submitted documents stating he is an asthmatic. He has won four Tour de France races using salbutamol, which "is a medication that opens up the medium and large airways in the lungs," according to Wikipedia.
(2) Getting more oxygen to the lungs has obvious advantages during the brutal three-week Tour de France, particularly in the grueling mountain stages.
(3) Cyclists need to seek "therapeutic use exemptions" before they're allowed to use many drugs, with medical doctors certifying that the TUE is necessary for a rider's health. Bradley Wiggins, Team Sky's first Tour winner, had TUEs for asthma and other conditions.
This is from Cycling Weekly: "According to World Anti-Doping Agency (WADA) rules, 1,600 micrograms of salbutamol can be taken by an athlete via inhaler in a 24-hour period without the need for a therapeutic use exemption (TUE) certificate. So Froome doesn't necessarily need a TUE for his asthma."
(4) Research indicates that asthmatics using drugs tend to do better. One example: Runners World magazine in 2012 noted that asthmatics in the Olympics are "roughly twice as likely to win a medal as their non-asthmatic peers." Team Sky has been particularly successful with asthmatics. Bradley Wiggins won the Tour in 2012 for Sky, making five times Froome's team has won with drugs legally allowed.
(5) Last year, at the Vuelta de Espana, Chris Froome tested well above the accepted limit of salbutamol. The well financed Team Sky found experts who stated the tests for salbatamol were flawed. After months of indecision, bicycle doping authorities dropped their case against Froome.
(6) So under present rules, we fans don't know how much of this beneficial drug that Froome is taking. This makes for an ugly situation in which the Tour victory could go to someone who (at the least) can be suspected of cheating.
One difficulty with my plan to name a drug-free winner: it would require the Tour -- or all the teams -- to declare who is using performance-enhancing drugs under TUE. Generaly, this information is secret, apparently under the assumption that a person's medical issues are not a public concern. Wiggins' and Froome's were made public by a Russian hacker group. And of course, we fans maintain we should have a right to know.
So riders and teams -- step up: Tell us who is racing completely clean, and then let's have a new category for winning the Tour de France.

Posted by John Dorschner at 8:30 AM No comments:

As in-patient days continue to shrink, hospitals are building out-patient locations in rivals' backyards in a quest for new customers. My cover story in Miami Herald Business Monday shows that cash-rich Baptist is expanding everywhere from the Keys through Palm Beach County. Others are struggling to keep up. Story available HERE.
Posted by John Dorschner at 5:54 AM No comments:

​      My Miami 1980 research has led to a Miami Herald story:
"The tumultuous Mariel refugee influx of 1980 is back in the news — this time at the core of a roiling debate about whether immigrants hurt less-educated native-born workers. The heated arguments focus on the new work of a Cuban-born Harvard professor, George Borjas, who concludes that Mariel caused a drastic drop in pay among native-born Miami high school dropouts — the majority of whom were black." That story is available HERE.
A companion Herald story discusses the discusses the politics of immigration, including Borjas' idea of taxing employers who benefit from cheap immigrant labor and how some progressives cite Borjas in rethinking their stance on immigration. That story can be found HERE.
Posted by John Dorschner at 6:58 AM No comments:

Inside the Gig Economy

The latest Biscayne Times has my take on the gig economy -- co-working spaces in Miami, the latest manifestation that the old economic world of full-time big corporation jobs with benefits is dying out.
This is what has sparked considerable anger from both young Bernie followers and aging Rust Belt Trumpers: no steady work that earlier generations had been able to count on. As Richard Greenwald, author of "The Death of 9-to-5" puts it: "This is the new normal. It’s going to only intensify, and then the question is: What do you do?”
When I started this story with a quick survey of online articles about co-working, I assumed I’d be seeing long rows of 22-year-olds hunched over laptops dreaming of developing the next Facebook or killer app. But after visiting eight Miami co-working sites, I’ve seen that the reality tends more toward immigrants in their mid-30s promoting non-tech businesses
Posted by John Dorschner at 7:36 AM 1 comment: